Continuing our theme of ‘Managing in Tough Times’ is Kahlie Hoffman, a Kansas City-based personal injury trial lawyer who’s raising two young boys behind the scenes. Despite the difficulties her busy life has handed her, particularly during the COVID-19 pandemic, Kahlie believes that each role she plays strengthens her abilities in the other. Reflecting on the challenges and triumphs she has faced while managing both full-time roles, Kahlie provides invaluable insight into the value of self-care, setting realistic boundaries for oneself, and communicating those boundaries to others.

Get ready to reunite with the TLC tribe! There’s only one chance to attend a TLC 3-Week College this year and you won’t want to miss it. Click here to learn more & apply for the September Flagship College by the May 25 deadline. 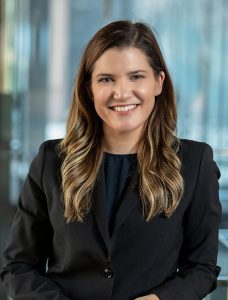 Ms. Hoffman attended the University of Missouri-Kansas City School of Law, where she was deeply involved in UMKC’s Department of Advocacy. As a competing member of the national mock trial team, Ms. Hoffman competed in trial competitions across the nation. During her third year of law school, she and her teammates proudly earned the right to represent UMKC at its first appearance at mock trial nationals in almost four decades. In law school, Ms. Hoffman was also a founding member and executive associate justice of UMKC’s Board of Barristers, a Law Review staff member, and was a dean’s list recipient every semester. In 2014, Ms. Hoffman graduated cum laude from UMKC with an emphasis in litigation.

Ms. Hoffman began working in the legal field, in personal injury work, at the young age of 17. She has spent the entirety of her legal career diligently working to help injury victims seek justice. She is experienced in a wide variety of cases, ranging from national campaigns against dangerous pharmaceutical drugs to auto accidents to wrongful deaths. She is licensed to practice law in state and federal courts in both Missouri and Kansas.